Macaroons VS Macarons, A Delicious Conundrum It's a rare treat when you are faced with two such yummy choices. Do you enjoy a delicious chewy coconut macaroon or indulge in a light and flaky macaron? Or both? And just why do the have such a similar name for two such different treats? It is a story that unfolded over centuries.

The earliest macaroons were made in Italy. These flour-less and unleavened treats were made with a mixture of almond paste, egg whites and sugar. While these cookies eventually became known as amaretti in their native Italy, the soon to be modern macaroon began to evolve in several places.
Some chefs had begun to swap the almond paste for finely shredded coconut. These very sweet and chewy cookies became a hit at many Passover meals. They were sweet, easy to make, and unleavened, a perfect dessert. This version became the modern macaroon.

The macaron has a slightly different story. When Catherine de Medici was wed to the French King she brought along a number of servants and chefs from her native Italy to remind her of home. Those chefs taught the French to make their almond based version of a macaroon. Over time the French refined it and gave it a special twist. It became known as the French macaron, a light, flaky, and often chocolate-iced dessert.


Very Similar But Oh So Different 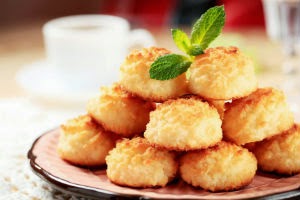 The recipe for each cookie has remained remarkably similar over the years. Both are simple; comprised of just egg whites, sugar and ground almonds or shredded coconut with very few additions. Even the baking technique is similar. Both remain primarily drop cookies cooked quickly in a hot oven.

It is the ground almond that makes the French version so light and airy. The European Jewish coconut version is heavier but richly flavored. Each has a dedicated following, enough that this is one cookie that even has its own day of celebration in some countries. May 31st is considered to be National Macaroon Day, the perfect excuse to enjoy both cookies for what they are, a delicious and even historically interesting addition to any meal.
Posted by Unknown at 9:11 AM No comments: